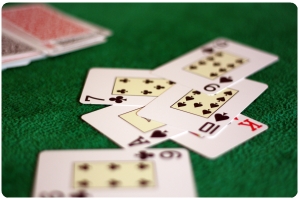 Card games are a favorite past time in many places globally. Today, there is an untold number of different card games in the world. Poker is perhaps the most widely recognized card game and, with unsurpassed ascendancy Texas Hold’Em is probably a pretty close second. Similar to bingo and other traditional games, variations of poker have been played for hundreds of years. But where did these games come from? The answer to that question is explored here to better understand the origins of the card games of Poker and Texas Hold ‘Em.

The development of Poker precedes that of Texas Hold ‘Em by about a millennium nevertheless, there is no universally accepted consensus among historians as to the exact chain of development that yielded modern society the card game we now call Poker and so holds true for many of its variations. Still, some scholars believe they can trace a rough history of Poker from seemingly disparate facts gathered from various regions. The earliest accepted iteration of a Poker-like game appeared in China about 1000 years ago when the then-emperor commissioned the fabrication of specialized domino pieces, and over the centuries similar alternative games crept up in places like Germany and India. Perhaps, the closest modern ancestor of Poker was developed in France during the 1800s. The reason it is considered the nearest modern ancestor Poker is that it was the first such game to use actual cards. Card games quickly spread to the United States, and by the time of the War Between the States, Poker was already embedded into American culture. Civil War soldiers in both the Confederate and the Union Armies were known to be infatuated with card games in general but Poker, specifically. This one viable brief history of Poker itself is spotty and uncertain – likewise that of Texas Hold ‘Em.

The precise date of the invention of Texas Hold ‘Em. It appeared around turn of the century 1900, and had enjoyed a more or less steady incline in players since then. The popularity which Texas Hold ‘Em holds today is not undue to modern mass media. Texas Hold ‘Em can be seen played on cable television stations such as ESPN, and when monetary gambling was allowed in the United States via the World Wide Web, many a player fancied themselves a Texas Hold’Em aficionado The problem was that too many people considered themselves Texas Hold’Em aficionados who actually were not, and they lost plenty of money. Like any good self-delusional person, many tried to win their money back only to lose more until some were not able to bear the cost of living expenses like mortgage payments, rent, groceries, and utilities. Some of these not-so-Texas Hold ‘Em-aficionados turned to the government for redress, and eventually, the government passed a law banning monetary gambling across the World Wide Web in the United States.